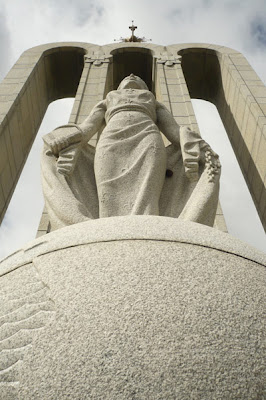 I looked up the origin of the word monument and read it is derived from the Latin 'monere' which means 'to remind'.

Monuments are closely linked to historical events and society's consciousness.
When does a sculpture become a monument? Some buildings are also declared monuments. How do we explain the Taj Mahal which was built as a token of love by the Mughal Emperor to his wife? That was the expression of love of one man, so why would a whole society be interested in it as well? Maybe we are all just suckers for a good love story and it captures our hearts, or has the fact that it was built 400 years ago in a unique architectural style more to do with it?
How do we explain Helen Martins' Owl House?(which is declared a monument after her death). It was definitely a monument to her, because she created it(with the help of Koos Malgas) to remind her of life amdist the vaal Karoo. And possibly to acknowledge her existence to herself and proclaim her creative merit, even though during her lifetime her society didn't applaud or even accept her artistic talents. It is a building and a sculpture. I'm glad it is preserved as a monument, even though she couldn't experience that approval during her lifetime.

Recently I visited the Huguenot Monument in Franschoek. It was created to acknowledge the French Huguenots's influence with their arrival to South Africa during the 17th and 18th century. Many Protestant Christians were prosecuted in France during the French Revolution and many fled to unbeknownst (to them) continents. The French Huguenots brought a strong religious, cultural and agricultural influence with them which is still very evident in the country today.

It's a beautiful monument to me, maybe not only for it's aesthetic value(it's nestled between the mountains), but also because I know it commemorates my heritage - people who were willing to sacrifice the known for the freedom to live how they believe. It reminds me who my ancestors were and in a sense who I am. 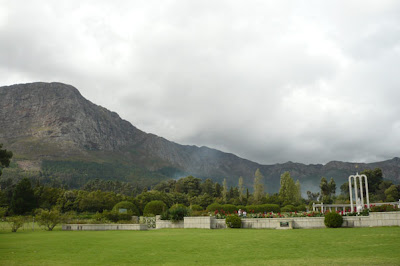