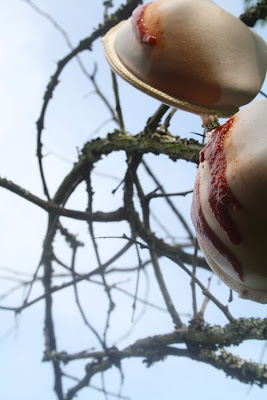 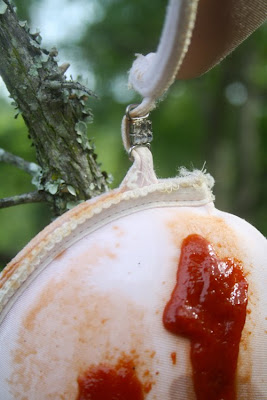 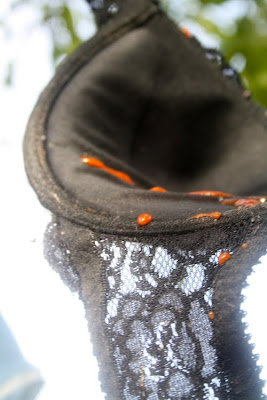 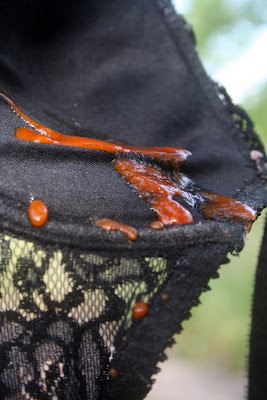 “Slagyster” is the Afrikaans word for being entrapped; to be caught in a trap. Poachers set traps in the veld for the unsuspecting buck, lurking in the bushes. The word “slag” also refers to slaughter as in the slaughtering of animals.

It is said the first design of the bra as we know it was designed by a woman, Caresse Crosby, during the First World War. She made it for herself & her friends soon requested a similar design. Women felt this innovative design gave them the freedom of movement, whilst still providing enough support. It was in revolt to the restrictive corset women were forced to wear during the preceding Victorian era.

Even though it can be seen as a small accomplishment, the bra as we know it today still battles with its dual identity as revolution & entrapment. For it still made them subject to the male perspective precisely for what it conceals, what they wish to see & own. It is simultaneously the symbol of feminity & vulnerability.

Women fall prey to the trap – to allow themself to become the observed. To give away their power to see in order to be adorned.

They allowed themself to be seen, to be looked at, to be the object - in a misguided belief that that would be the only way to attain affection: to conceal (& re-create her identity); to appear more placid, less intimidating, less intelligent in an attempt to appear more edible, more approachable. Women are fed the subtle lie that it is impossible to be loved for what they are. In wanting to be seen, we lost our power to see; to be the observed, we lose our perspective to be the observer. The only power women have left is in how much they choose to reveal when & how much is still kept hidden.

I wonder if it's possible… could one be both? Object & voyeur?
Posted by Art Germinate
Newer Post Older Post Home